Excerpt from History of Richland County

On Grand Prairie, were the families of John Bush, the Glenns and Harrises, and in 1829 Elijah Utterback and Joshua Cotterel , both natives of Kentucky. Shadrack Ruark was one of the advance of the second immigration. He was an itinerant Methodist minister in Ohio. About 1836 or 1837, he made a visit to his brother, settled in Bonpas, and became enamored with the country here. On his return to Ohio, he spread the fame of this fair territory far and near as he traveled his circuit, and many were induced to come here about 1840. About this time also came a large number of German families, who settled principally in the northern range of townships. Among them were the Ginders, the Schneiders, the Cletfers, the Kochers, the Spitts, the Weilers, the Eyers, the Sterchies, the Swallens and the Balmers, most of whom were from Stark County, Ohio. Up to this second immigration, the larger proportion of the county was open to pre-emption, and even in 1850 there was a considerable area of public land. From this date to 1853, there was a keen demand for government lands, and the last acre was taken in this latter year.

Prepared especially for the 1990 Kocher reunion by Rita (Ginder) Stobaugh

Martin, a blacksmith, married Katherine Ory, widow of Joseph Vagenthal, in 1831. Martin lived 82 years. Katherine lived 83 years and 5 months. They are buried at the Old St. Joseph Cemetery in Stringtown, Illinois. The journey from their births in the Alsace to their burials in Stringtown, Illinois, follows. It was a law in their homeland at the time that of a family with sons all but one would be conscripted into the military. Martin, 42, and his wife, Katherine, 52, decided to take their young family to America. Leaving one child, long since deceased, in their homeland, they took their three sons and two daughters and sailed on the ship, The Sarah Bridge, with Captain Studivent of Havre, France, on November 2, 1852. Their children ranged in age from Katherine, 18 years, Joseph 16 years 6 months, Caroline, 12 years 6 months, Anthony, 9 years 7 months, to Martin Jr. who was 8 years old. The wind was a factor in how fast they would travel. They were 133 days at sea. On the ship, Mrs. Kocher was told by a fortune teller, "Your sons will come back across the ocean three times faster than you are going now." It happened that their grandsons and many great-grandsons returned to Europe and fought in two wars. One or more were killed in WWI (1915-18). Two or more were killed in WWII (1941-45).

The Kocher family arrived in New Orleans, Louisiana, on March 14, 1853. They traveled by steamer up the Mississippi and Ohio rivers to Cincinnati, Ohio. From there they went overland through Akron, Ohio, and settled in Massillon in Stark County, Ohio. Katherine married John Steber in 1854. Caroline married Peter Handabach in 1860. These men were coal miners in Ohio. Joseph married Elizabeth Weiler on May 31, 1859. Anthony married Margaret Brookfield in 1861. The Kochers owned small farms and mined coal.

Kocher families left Ohio and began settling in German Township, Richland County, Illinois, in 1865. Joseph, Elizabeth and their three children were the first to leave Massillon by railroad, March, 1865. They purchased 80 acres of timber and land where "prairie grass stood 10-15 feet tall." Joseph spent his first winter working in the coal mines in Washington, Indiana. They had in all 11 children. Anthony, Margaret and their first son came to Illinois in 1867 and purchased 90 acres of timberland. Anthony later sold it to his father and moved with his family in 1871 to Washington, Indiana, where he became a mine boss and spent the next fifteen years in the coal mines. Anthony and Margaret had in all 15 children, three of whom died in infancy. Caroline (Kocher) and Peter Mandabach came with their two sons to Illinois in 1866 and later moved to Washington, Indiana, where Peter worked also in the coal mines. They had 14 children, six of whom died. In 1870 Martin Kocher, Sr., his wife Katherine, daughter Katherine (Kocher) Steber, widow of John, and her six children, and son Martin, Jr. came to Illinois. Katherine Steber purchased land near her parents. It is said she kept an axe behind the door of her home for protection. Martin, Jr. married Mary Schneider on November 9, 1871 and lived near his parents and later purchased their land. They had 12 children. The Martin Kocher, Sr. families lived within a few miles of the present St. Joseph Catholic Church (1901) in Stringtown and were members of the old St. Joseph Catholic Church near the Old St. Joseph Cemetery.

(The information in this history was derived from conversations with Clara (Kocher) Ginder (1883-1982) only daughter of Martin, Jr. and Mary (Schneider) Kocher, and Dorothy Kocher (1913-1990) great-granddaughter of Joseph Kocher and Elizabeth (Weiler) Kocher.) 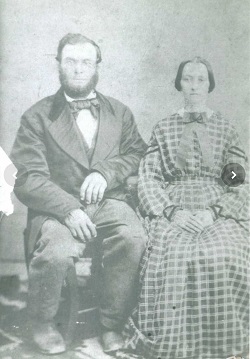 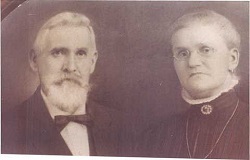 Martin Kocher, Jr., was born at 4:00 a.m., October 13, 1844, at Seltz, Bas Rhin, in the district of Wissembourg, Alsace, France. He was the son of Martin Kocher, Sr., a blacksmith, and Katherine (Ohry) Kocher. Shortly after his 8th birthday, Martin, Jr., left the Port of La Harve, France, on the ship Bark Sarah Bridge with his parents and older brothers and sisters, Catherine, Joseph, Caroline, and Anthony. The date was November 3, 1852. They arrived in America, landing in New Orleans, Louisiana, over four months later on March 14, 1853.

From New Orleans, they traveled by steamer up the Mississippi and Ohio rivers, and then overland through Akron, Ohio, first settling in Summit County, Ohio, near the town of Clinton. They later moved ten miles south to Stark County, Massillon, Ohio, where Martin, Sr., and his sons farmed and mined coal.

Martin, Sr., and Katherine moved with their youngest, son Martin, Jr., and their oldest, widowed daughter, Catherine, and her six children to German Township, Illinois, in 1870. Martin, Sr., purchased land from his son, Anthony, who was moving to Indiana, adjacent to the farm of his oldest son, Joseph, who had been in German Township since 1865. Anthony's land had been purchased at the same time, although Anthony and his family had lived there only since 1867.

Soon after arriving in German Township, Martin, Jr., met Mary Schneider, daughter of Godfrey and Regina (Hahn) Schneider, who had been born in German Township May 18, 1853. They married at their home parish St. Joseph Catholic Church, Stringtown, Illinois, November 9, 1871.

Following Mary's death May 18, 1921, Martin lived within sight of the home place, at the home of his daughter, Clara (Kocher) Ginder. He died January 12, 1923, and is buried with Mary at St. Joseph Cemetery in Stringtown, Illinois.

In 1949, while home to Ray and Irene (Zwilling) Kocher and their twins, David and Diana, two months old, the Martin Kocher home place burned.

My 2nd G-GPA, William Kocher, was born in Stark County, Ohio. He is the son of Joseph V. Kocher.

My 3rd G-GPA, Joseph V., seems to have been the first one to settle in German Township, Anthony followed but soon gave in to the pioneer life. Their father, Martin Sr., I personally believe did not want Joseph to settle out here alone so he made his way here once hearing of Anthony's readiness to leave. He picked up where Anthony left off and the two families went to work, clearing timber and making a life for themselves. Martin Jr. shortly after this time became a man himself and settled about a half mile east of present day St. Joseph church. Joseph V. lived half mile west of present St. Joseph church and the Martin Sr. homestead is now an open field. On Google Earth, you can still see where the homestead once set due to the soil disturbances. He had a round log cabin, approximately 30'x30' and a considerably good sized barn approximately 6000 sq. ft.

Anthony, the second born son, he sold his land to his father, Martin Sr., and went back to Washington, Indiana, so I wouldn't include him in the list of Richland County historical patrons.

I also have information on the Zubers as well, my grandmother was Anna Zuber-Kocher, married to Walter Kocher. Their son, Gilbert, is my father. I have the revised Zuber Family Tree folder in my possession.