Richland lies west of Lawrence, north of Edwards, east of Clay, and south of Jasper. It has an area of 357 square miles, and a population of 15,970 souls. It was one of the later counties, being organized February 24, 1841. Its territory lay in Clay and Lawrence.

In 1820 there were about twenty families in the territory included within the present limits of the county. It is said two brothers by the name of Evans came from Kentucky and found near the present site of Olney an unoccupied wigwam in which the fire was still burning. They occupied it. Hugh Calhoun, a relative of the South Carolina statesman came about 1820 or earlier. Other names of early settlers are Thaddeus Moorehouse, Thomas Gardner, James Parker, Cornelius De Long, James Gilmore and two Germans Ginders and Schneider.

Elijah Nelson and Thaddeus Moorehouse built the first frame houses about 1820, and shortly afterwards James Laws erected the first brick house. Vincennes was their usual trading place, but a store was opened at Stringtown in 1825. Stringtown was in the northeast corner of the present county. The first school in the county was taught in Watertown by Isaac Chauncy. In 1822 the Baptists erected a church on the "trace" road. Lorenzo Dow is said to have delivered sermons in this church house. This "trace" was the trail or road which ran from Vincennes to St. Louis and is without doubt identical with the George Rogers Clark trail of 1779. It was a mail route as early as 1805. Louis and James Beard, his brother, carried the mail on this trail in 1820, and in 1824 the firm of Mills and Whetsell put on two or three four-horse stages.

Elijah Nelson practically located Olney in 1820 when he built his frame house on the old trace road. There may have been other houses near, but in 1841 when the county was created the city of Olney, which is almost exactly in the geographical center, was laid out. It was laid off on either side of the trace road, but the town has built more toward the south as the B. & O. railroad passed about a quarter of a mile south of the trace. In the earlier years the town was called "the painted town" because the New Englanders, of whom there were considerable numbers, painted their houses, and this gave the town an attractive appearance. It grew slowly, having only 300 inhabitants in 1855.

Mr. R. K. Park, of Parkersburg, has gathered considerable matter pertaining to early Richland county, especially of the south side and acknowledgments are due him for this information. Roswell Park was a native of Connecticut. He came to Parkersburg in 1835, entered land, and taught school for fifteen years. He was a mathematician and a scientist. He was a tyrant in the school room. He walked with a cane and crutch and these he used to good effect in “preserving order.” The first school house near Parkersburg was erected prior to 1840. Some pupils came six miles to this school. The second house built in that region was only 10 by 12 feet, of logs with the proverbial fireplace and puncheon floor and seats. The pupils carried water from a neighboring well, and all drank from the same mouth. The first high school organized was in Olney.

It was the custom of the early settlers to build their homes in the edge of the woods where fuel and shelter were plentiful. The earlier settlers were from the slave-holding states, while those that came from 1830 to 1850 were from the eastern states. Most of the foreigners are Germans. These late comers had to take the lands that were left and though usually the poorest lands, these thrifty people have outstripped their neighbors on the better lands.

The early settlers were a sort of go-lucky lot and enjoyed life fully. They participated in all the customs of pioneer life - log rollings, corn huskings, house raisings, dancings, infairs, charivaris, etc. A log rolling was held in sight of Parkersburg to which 100 men came, and the logs they piled and burned would, if sawed into lumber, have built a young city. It has been estimated that the lumber burned in these logs was worth $500 per acre in many instances.

A DWELLING BUILT OF CLAY AND STRAW MIXED, IN THE SOUTH OF RICHLAND COUNTY. BUILT IN AN EARLY DAY AND USED UNTIL RECENTLY. 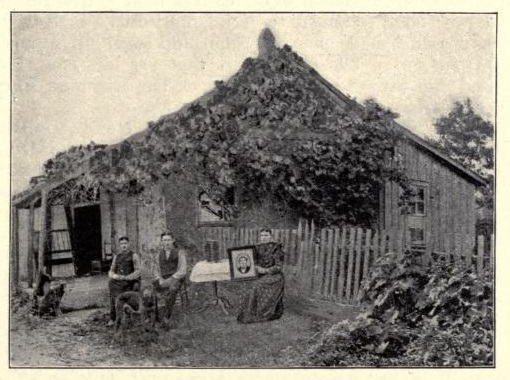 The year 1881 was a hard year on the farmers of southern Richland. The drouth was unusually prolonged and added to that there was a severe scourge of the chinch bug family. Nothing was raised on many farms. The chinch bug pest returned for the succeeding years and many farmers who had mortgaged their farms were ruined sold out under sheriff's sale, the land bringing from $5.00 to $10.00 per acre. Northern people came in and bought up this land and organized small farms into larger ones, enriched the land, introduced modern methods, planted orchards and made money. The land went up in price, some of it to $100 per acre. The old settlers that are left from the earlier days are dazed and cannot understand it. "The Richland Farm" and “The Simpson Farm” are illustrations of the above.

George Mason was an early cabinet maker, Henry Holleman was a tanner, Joseph Bare was an old time blacksmith who burned his own charcoal. George Eastman was a cooper and supplied barrels, churns, buckets, etc. Two doctors came very early; one was Daniel Eckley, the other David Burget. It is said they made their own medicines and many people lived to old age in spite of their remedies. Dr. Eckley lived to be 95 and Dr. Burget to be 83. Dr. Reed settled in what is now Lancaster Prairie about 1844. He also was a root doctor, carried the roots and herbs with him.

The first church house in Richland was built by the Regular Baptists. It was used also for school purposes. It was known as Antioch, and stood five miles east of Olney. Wm. Martin of Kentucky was the preacher there. Union church, twelve miles southwest of Olney, and Shiloh, west of Olney, were Baptist churches. The ministers were Champion Marten, Richard Gardner, Benjamin Coats, Joel Hume, Richard M. Newport, Jerry Holcomb, and Charles Wheting. These were probably of different denominations.

The first Methodist church was a log structure built in the northwest part of the town of Olney. It was built in 1842. The first Catholic church was erected on Grand Prairie near where John Achs now lives. It is still used as a place of worship. Among the noted preachers who were in this county were Lorenzo Dow and Peter Cartwright.

Richland county was loyal to the Union in '61 to '65. She furnished her quota of men. Among the officers were General Eli Boyer, Colonel John Lynch, Captain Charley Hollister, Captain J. R. Johnson, Major A. Spring, Colonel John St. John. There is at least one Revolutionary soldier buried in this county. His name was Wm. Richards. He is buried at Richland Church, six miles north of Olney.

Olney is the only city in the county. It has a population of 5,011 and is one of the most up-to-date cities in Southern Illinois. Noble, Parkersburg, Amity, Calhoun, Claremont, Dundas, and Wakefield are towns or villages.